I would wager a pint of beer, IPA of course, that anyone reading this post with a dedicated macro lens, ie with a magnification of unity, will be shooting at 50mm or more, and many will have a lens at 100mm. As an example I have the Canon 100mm F/2.8L.

The depth of field at unity magnification is, of course, small, ie hovering around a mm on my full frame 5D3, according to the aperture, but independent of the focal length.

From a composition perspective macro lenses can be limiting as, for example, at a focal length of 100mm the diagonal field of view is just under 25 degrees.

Well now the FoV restrictions have been lifted, thanks to Anhui ChangGeng Optical Technology Company Limited (Venus Optics), a Chinese camera lens manufacturer based in Hefei, Anhui. Their first lens was a 60mm macro with a magnification of 2.

Their second lens, and the one I got in the post today, is a wide angle (15mm) F/4 macro: http://www.venuslens.net/product/laowa-15mm-f4-wide-angle-1x-macro-lens/ 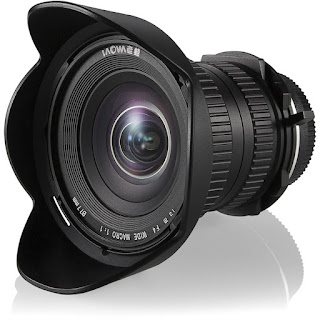 At 15mm the diagonal field of view is now pushed out some 110 degrees: thus offering us the chance to take macros and show the environment of the subject.

Another feature that this lens has is a shift of +/- 6mm, which I used in the test image, taken at an aperture of F/5.6.

In this post all I wanted to do was to alert you to the lens and illustrate the wide angle capability with this terrible capture made in front of my TV, with a cloth flower as my subject. 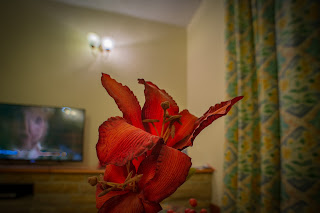 In future post I hope to explore this new lens in the real world!
Posted by Grayheron at 3:14 PM