Note: this is a slight rewrite of the original post to address an 'error' that had crept into my thinking.
There are two types of long exposure (LE) photographers: those that shoot up to 32s and those that go beyond the ‘barrier’. I spilt the LE world this way, rather than say those that use ND filters or don't use ND filters, as capturing up to 32s is relatively simple. Up to that exposure we can rely on the in-camera metering provided by the manufacturers.
Beyond the 32s ‘barrier’ is the Bulb World!

One simple way to get into the Bulb World is to exploit the so-called exposure triangle. Thus, if I set an in-camera exposure of say, 4s at an ISO of, say, 800, this is the same as an exposure of 64s at and ISO 100. You can also use aperture to achieve a similar result. You still need to time things yourself, with or without the help of technology, eg the ML Bulb timer, ie Canon is of no help to you!

The problem with the above approach is that it assume the ‘test exposure’ can be achieved. At night this is likely to be the case. But what about in bright sunshine?

For example, let’s assume we are using the tried and test ‘sunny 16’ rule: shutter speed at F/16 is the reciprocal of the ISO. Thus at F/16 and a base ISO of 100, I would shoot at 1/100s; and be pretty confident this would a reasonable exposure: not optimum maybe from an ETTR perspective, but OK.

For bright conditions, where the base exposure can’t be pushed slower than, say, tenths or hundreds of a second, we need the help of neutral density filters (NDs).

Ignoring graduated NDs, there are two basic types of ND: a fixed density ND and a variable density ND. The advantage of the fixed is that it imprints no exposure artefacts, other than a colour cast sometimes, to the captured image. The variable ND, however, if used at the extremes and on a wide angle lens, may/will create the dreaded X-effect.

After various experiments I have settled on the following front ND set (used with step up rings): Together with a rear Vizelex ND 2-10 stop filter, which I need to use with my Mamiya 45mm 645 lens.

On my trusty 5D3 the combination, with the Varavon Multi Finder LCD Viewfinder, looks like this, which shows the rear mounted Throttle with a front mounted ND filter. 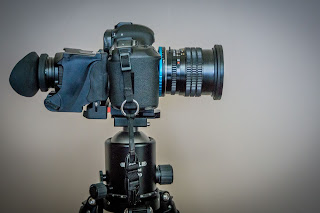 My base set up procedure is simple. According to the environmental conditions, and the end exposure I’m seeking, I choose the front mounted ND to create a base (ISO 100 and F/16) exposure of a seconds to a fews 10s of seconds, with my Throttle set at the lowest stop setting, about a stop down from an ND 0.

With this set up, I can use the rear mounted variable ND to dial in any exposure I wish. Although the Throttle has a 2 to 10 Stop range, because of exposure artefacts towards the max end, I don’t go above about 9 stops.

Thus, if, say, I wanted an end exposure in the 400s range, I would set my front NDs up to give me an ISO 100 base exposure (at ND min on the Throttle) of about 10-15 seconds. Then, once composed and focused, I would dial in the Throttle ‘stoppage’ to achieve the 400s (or more, or less) effect I was looking for.

It all sounds to simple: and it is! There are a few complications.

First, what about focus. Well, for me I tend to use a hyperfocal strategy. Thus at 45mm and F/16 I focus at about 22ft.

This leaves setting the exposure and working around one problem with the Throttle: the variable Stop increments are not that linear.

I could revert to a trail and error approach, but why bother when you have Magic Lantern. There is an ND module, but this is not yet incorporated in the nightlies.

Then there is the ML Auto ETTR module, but, until now, that was limited to shutter speeds up to 32s; after that the ETTR algorithm would increase ISO. That is you couldn’t do LE work above 32s using Auto ETTR.

In the last few days, Alex (one of the ML gurus) has tweaked the Auto ETTR algorithms such that you can now dial in Bulb limits up to just over an hour! The Auto ETTR will now find a solution up to that shutter time, before increasing ISO. At the moment the tweak is only in an ML fork, so you need to compile things yourself: which is what I did this morning.

After a few false starts, working out how to use the new Bulb-based Auto ETTR, I converged on the following workflow:
It is early days regarding the new ML LE ETTR mode and I will be carrying out more experiments. However, here is a crude test image, ETTRed at 240s on a windy, but bright mid-day, ie the trees are all moving! The Sunny 16 exposure would have been about 1/100s without any ND filters, ie I was using just short of 15 stops of combined front and back ND. 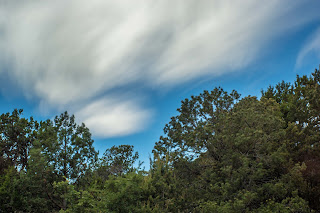 Posted by Grayheron at 3:10 PM