Being a photographer and living in New Mexico has many benefits. The biggest as far as I’m concerned is being a short distance from Bosque del Apache, which was established in 1939 to provide a critical stopover for migrating waterfowl.

Most know the refuge for the thousands of Sandhill Cranes, Snow Geese and other waterfowl that winter here each year: http://www.fws.gov/refuge/Bosque_del_Apache/

According to the Bosque del Apache web site: “Petroglyphs tell the story of an ancient people that lived and hunted in the area. The river and its diversity of wildlife have drawn humans to this area for at least 11,000 years when humans migrated along this corridor, sometimes settling to hunt, fish and farm. Artifacts and stone tools found nearby tell us that nomadic paleoindian hunters pursued herds of mammoth and bison in the valley.”

For photographers a visit to Bosque del Apache is an opportunity to try out your long lens and BIF (Birds In Flight) techniques. Although I have a Sigma 150-500mm, on today’s trip I wanted to experiment with my Canon 70-200 F4L and Canon x2 extender, on my 5DMkIII. The 5DMkIII has the latest firmware, so it is able to exploit the 5D’s auto focus at F8, which is the widest you can go with the extender attached using the F4L glass. Also, I decided to restrict myself to hand held on this trip.

So what did I find out?

First the 70-200’s IS is slow and rather clunky. In fact I switched it off in the end as I was losing BIF shots. I found the best strategy was to put the camera in Tv mode with a floating ISO, ie auto-ISO. This way I could address the shutter speed for the distance I was shooting at and the BIF needs. Typically, I had the shutter speed at 1/1000 or above.

Second, shooting BIF is hard! I hardly had any real tack sharp shoots: the best is below. I tried to perfect my panning skills and could see some increase in sharpness if I panned ‘correctly’.

Thirdly, I need longer lenses!!! It is clear to me, that if you are shooting in a natural environment, rather than in a captive one, your subjects will usually be too far away! Hence, you end up throwing away most of your sensor data through close cropping on your subject. At 400mm I was struggling and I don’t think my Sigma 500mm would have helped that much, as at 500mm it tends to a softer image.

Clearly I need a 600mm plus Canon L lens! Well I can only hope! 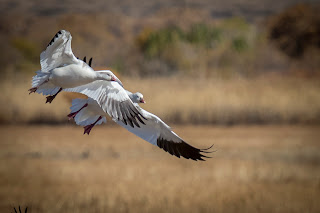