As a British photographer living in New Mexico the thing that strikes me the most is the light and the skies, plus, of course, the wonderful adobe architecture. These three New Mexican ‘attributes’ come together so well in Taos.

Taos is an old Pueblo and it has been made famous by various artists, including Georgia O’Keeffe and Ansel Adams. In particular the San Francisco de Assisi Mission Church, which was completed in 1816, is a large, sculpted Spanish Colonial church with massive adobe buttresses and two front-facing bell towers.

Ansel Adams photographed the church for his Taos Pueblo art book and Georgia O’Keeffe painted a series of perspectives of the church. O’Keeffe once described it as “one of the most beautiful buildings left in the United States by the early Spaniards.” In most works, these artists favored the view of the back of the church, with its smoothly sculpted adobe beehive buttresses.

The following two images are my humble attempt to capture the spirit of this beautify New Mexican Pueblo. 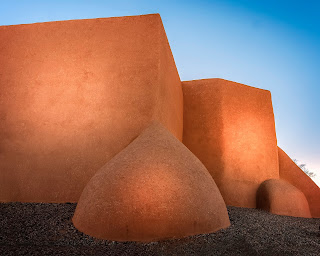 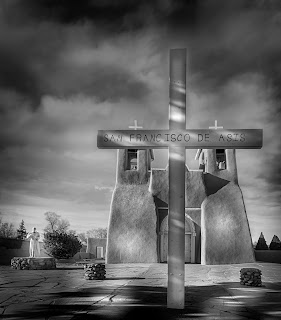