Three villages make up Acoma Pueblo: Sky City (Old Acoma), Acomita, and McCartys. The historical land of Acoma Pueblo totaled roughly 5 million acres; now only 10% of this land is in the hands of the community.

The Acoma have continuously occupied the area for more than 800 years, making it one of the oldest continuously inhabited communities in the United States. According to Acoma tribal traditions, they have lived in the village for more than two thousand years.

It is a great place to explore black & white image making and, of course, is associated with Ansel Adams

The two images below are some of my first attempts at capturing the feel of Acoma. The first shows the Mission San Esteban Rey, that was built c.1641 and the second is of one of the white log ladders that lean against the walls in Acoma. Before the Spaniards arrived, the kivas were round, but after their arrival, the Acomas disguised the kivas to look like houses to secretly practice their religion. 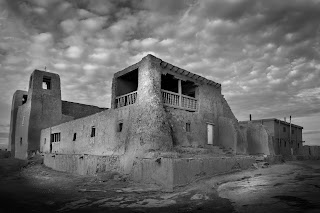 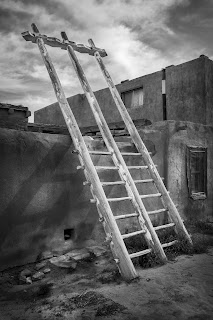 Posted by Grayheron at 2:35 PM